The colors the National Weather Service uses to show rainfall on its weather map couldn’t represent the deluge in southeastern Texas, so the NWS added two more purple shades to its map. The old scale topped out at more than 15 inches; the new limit tops 30 inches.

The move came as forecasters warn of continued flood dangers and continue to update precipitation totals from what the NWS is calling “unprecedented” rainfall from Tropical Storm Harvey, which made landfall as a Category 4 hurricane late Friday.

In a note about the change, the weather agency said on Monday, “Some perspective on the amount of rainfall that Tropical Storm Harvey has put down across Southeastern Texas and Southwestern Louisiana. We’ve had to update the color charts on our precipitation graphics in order to effectively map it.” 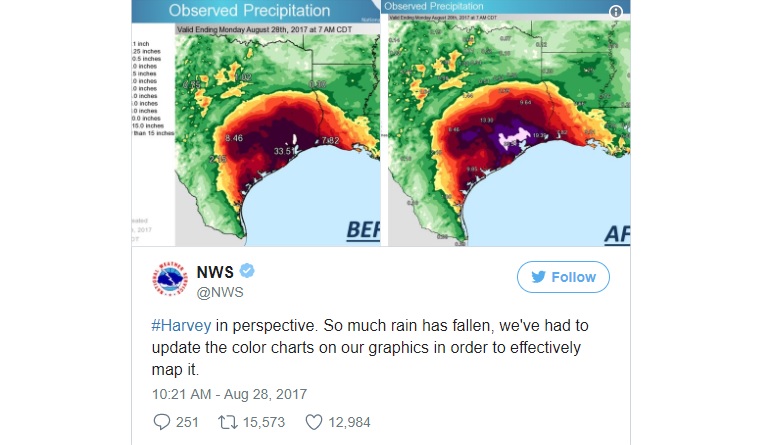 While the old scale used 13 colors from light green to dark purple to depict precipitation from 0.1 inch to greater than 15 inches, the new one resets that dark purple color to denote 15-20 inches of rain — and tacks on two more lighter shades of purple to denote 20-30 inches and “greater than 30 inches.”

Those new levels are not hypothetical, as many residents along the middle Texas coast and inland areas can attest. And heavy rainfall is forecast to continue this week.

Nearly 40 inches of rain have fallen near Dayton, Texas; at least 15 other areas also recorded rainfall near or above 30 inches, according to the federal Weather Prediction Center’s tally that it released around midday Monday.

Over the past 72 hours, more than a dozen locations in five counties have all recorded rain estimates above 30 inches, the NWS office in Houston reports.

In Houston, rainfall set a new daily record Sunday, with 16.07 inches reported at the city’s main airport. On Saturday and Sunday, the NWS said, more than 2 feet of rain (24.44 inches) fell.

View all posts by reneemichelelewis